Much awaited Jyotika’s Ponmagal Vandhal will the be first movie to premiere in Amazon Prime Video on May 29th ; Will become the first big film in the country to premiere on an OTT platform! 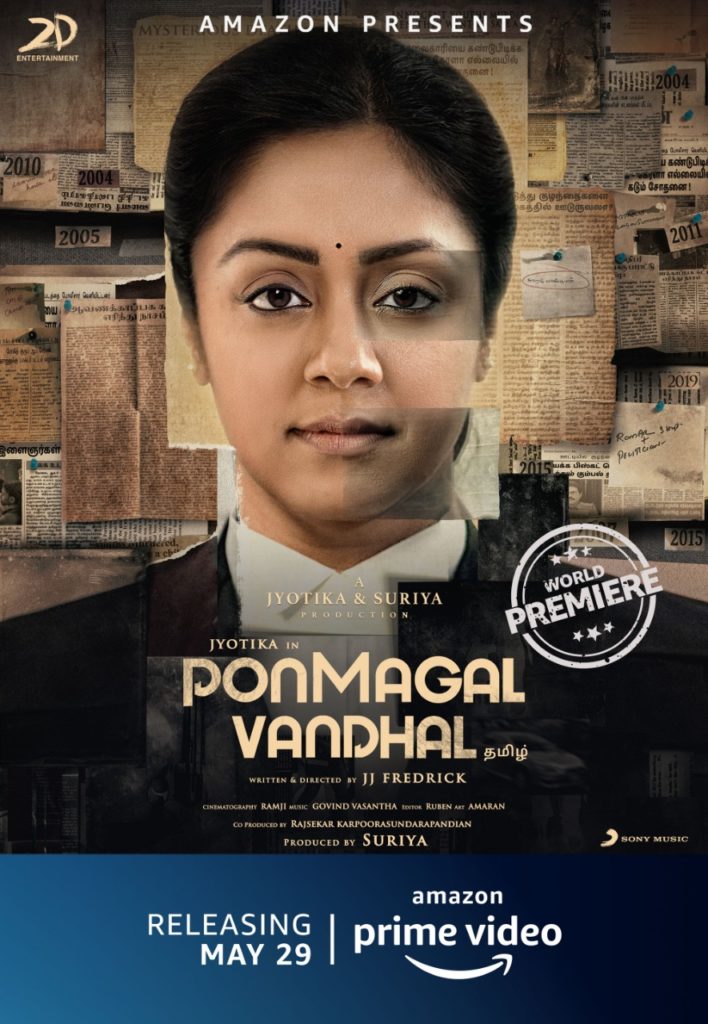 Slate of movies across 5 Indian languages with titles like Shoojit Sircar’s Gulabo Sitabo starring Amitabh Bachchan and Ayushmann Khurrana, Shakuntala Devi: Human Computer featuring Vidya Balan as lead, R. Madhavan and Anushka Shetty starrer Nishabdham among others too to premiere between May and August on Amazon Prime Video.

Chennai, India, 15th May 2020 – One of Tamil cinema’s most eagerly awaited films, Ponmagal Vandhal, featuring actress Jyotika in the lead, will premiere on Amazon Prime on May 29, 2020.

The film, which has an impressive cast including five directors — K Bhakyaraj, R.Parthiban, Pratap Pothen, Pandiarajan & Thyagarajan — in important roles, will be the first Indian mainstream film to premiere on an OTT platform.

The film’s first look itself had triggered a huge interest among fans and the public and the expectations from the film have only been rising with time.

Written and directed by J.J. Fredrick, the gripping court room drama has been produced by Jyotika & Suriya.

“The gripping legal drama, while being local in its narrative, is an engrossing story that audiences will surely enjoy. With a global release on Amazon Prime Video across 200 countries and territories, we are happy to take the film to newer audiences worldwide. Ponmagal Vandhal is an eagerly awaited film from Jyotika & Surya production. The first look of the film garnered a phenomenal response and we have been receiving a lot of requests to reveal more details. With the film releasing on Amazon Prime Video, we are glad that viewers can enjoy the riveting courtroom drama anywhere and anytime at their convenience.” 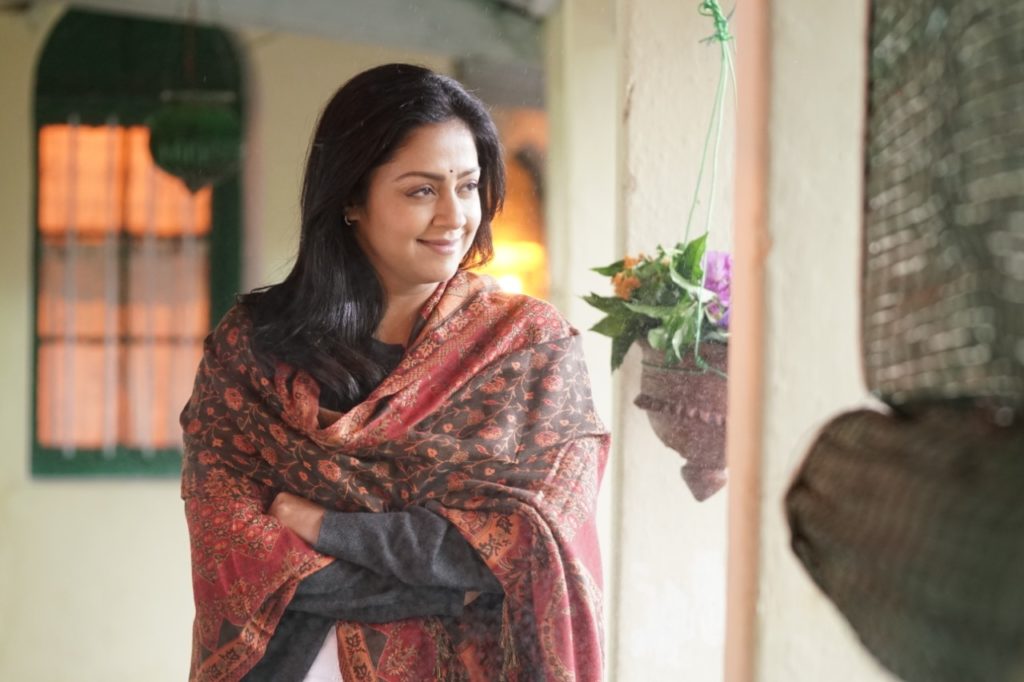 The movies will premiere exclusively on Prime Video over the next three months and will be available in 200 countries and territories worldwide.

“At Prime Video, we believe in listening to what our consumers want and working backwards from there. This belief is the genesis of our latest offering,” said Vijay Subramaniam, Director and Head, Content, Amazon Prime Video, India.

“Over the last 2 years, Prime Video has become the destination of choice for our customers to watch new releases, across the languages, within weeks of their
theatrical release. Now, we’re taking this one step further, with eight of India’s most-anticipated films premiering exclusively on Prime Video, bringing the cinematic experience to their doorstep.”

“Indian audiences have been eagerly awaiting the release of these 8 highly anticipated films and we are delighted that Amazon Prime Video will now be premiering these movies for our customers – who can enjoy watching these from the safety and comfort of their homes and on a screen of their choice. Prime Video with its deep penetration in India, with viewership across over 4000 Towns and Cities, and its world-wide reach in more than 200 countries and territories, will give a large global
release footprint to these films. We feel truly excited about this initiative and are confident of delighting our Prime Members with this offering” said Gaurav Gandhi, Director and Country General Manager, Amazon Prime Video India.

Ponmagal Vandhal (Tamil), from 29th May on Amazon Prime Video
Starring Jyotika, Parthiban, Bhagyaraj, Prathap Pothen and Pandiarajan, Ponmagal Vandhal is a legal drama. The movie is written and directed by J.J. Fredrick and produced by Jyotika & Suriya

Gulabo Sitabo (Hindi), from 12th June on Amazon Prime Video
Starring Amitabh Bachchan and Ayushmann Khurrana, Gulabo Sitabo is a quirky family comedy depicting day-to-day struggles of the common man. The movie has been written by Juhi Chaturvedi, directed by Shoojit Sircar and produced by Ronnie Lahiri and Sheel Kumar.

Nishabdham (Tamil and Telugu), from 19th June on Amazon Prime Video
Starring Anushka Shetty and R Madhavan, Nishabdham is the story of Sakshi an artist with speech impairment and Anthony, who is a celebrity musician. How the two come together and what transpires from there is what forms the crux of this thriller. The movie is written and directed by Hemant Madhukar and produced by Kona Venkat and TG Vishwa Prasad.

Penguin (Tamil and Telugu), from 17th July on Amazon Prime Video
Starring Keerthy Suresh, Penguin is written and directed by Eshavar Karthic. The film is produced by Stone Bench Films and Karthik Subbaraj.

The new releases will join the thousands of TV shows and movies from Hollywood and Bollywood in the Prime Video catalogue. These include Indian-produced Amazon Original series like Four More Shots Please!, The Family Man, Mirzapur, Inside Edge and Made In Heaven, and award-winning and critically acclaimed global Amazon Original series, including Tom Clancy’s Jack Ryan, The Boys, Hunters, Fleabag and The Marvelous Mrs. Maisel, all on Prime Video, which is available at no extra cost for Amazon Prime members. The service includes titles available in Hindi, Marathi, Gujarati,
Tamil, Telugu, Kannada, Malayalam, Punjabi and Bengali.

Prime members will be able to watch all titles anywhere and anytime on the Prime Video app for smart TVs, mobile devices, Fire TV, Fire TV stick, Fire tablets, Apple TV, etc. In the Prime Video app, Prime members can download episodes on their mobile devices and tablets and watch anywhere offline at no additional cost. Prime Video is available in India at no extra cost with Prime membership for just Rs 999 annually or Rs 129 monthly, new customers can find out more at www.amazon.in/prime and subscribe to a free 30-day trial. 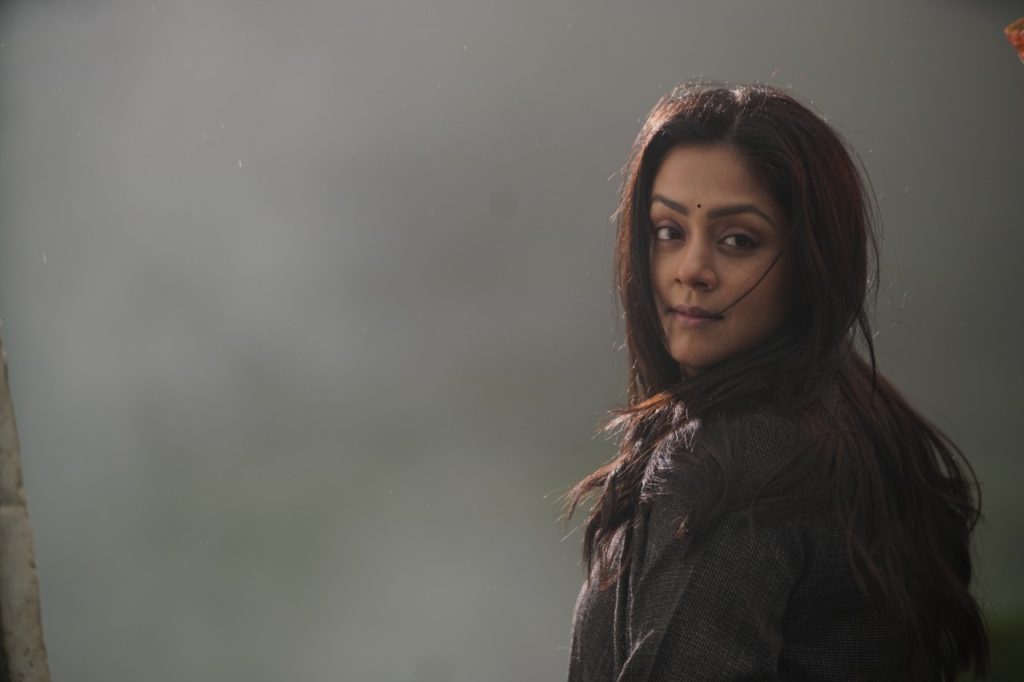 Prime Video is a premium streaming service that offers Prime members a collection of award winning Amazon Original series, thousands of movies and TV shows—all with the ease of finding what they love to watch in one place. Find out more at PrimeVideo.com.

● Instant Access: Members can watch anywhere, anytime on the Prime Video app for smart TVs, mobile devices, Fire TV, Fire TV stick, Fire tablets, Apple TV and multiple gaming devices. Prime Video is also available to consumers through Airtel and Vodafone pre-paid and post-paid subscription plans. In the Prime Video app, Prime members can download episodes on their mobile devices and tablets and watch anywhere offline at no additional cost.
● Enhanced experiences: Make the most of every viewing with 4K Ultra HD- and High Dynamic Range (HDR)-compatible content. Go behind the scenes of your favorite movies and TV shows with exclusive X-Ray access, powered by IMDb. Save it for later with select mobile downloads for offline viewing.
● Included with Prime: Prime Video is available in India at no extra cost with Prime membership for just ₹999 annually or ₹129 monthly, new customers can find out more at www.amazon.in/prime and subscribe to a free 30-day trial.